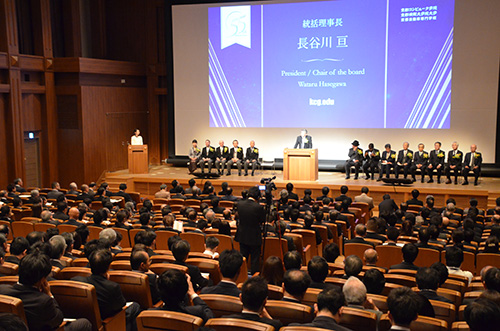 Japan's first computer educational institution Kyoto Computer Gakuin (KCG) 55th anniversary, Japan's first IT professional graduate school The Kyoto College of Graduate Studies for Informatics (KCGI) 15th anniversary commemorative ceremony November 1, 2018, Kyoto Computer Gakuin Kyoto Station (The Kyoto College of Graduate Studies for Informatics Kyoto Station Satellite) It was held in a large hall.Many people from industry, government, academia, alumni, and current students from Japan and abroad attended the event.Looking back over the 55 years of the KCG Group's history, we have renewed our determination to play a more leading role in IT education than ever before, with "driving Society 5.0," "fostering global human resources," and "expanding and enhancing industry-academic collaboration" as the pillars of our activity policy for the next 100 years.A celebration party followed at the Rihga Royal Hotel Kyoto, featuring food, drink, and live performances.

The commemorative ceremony opened with a video reviewing the 55-year history of the KCG Group.Wataru Hasegawa, Chairman of the KCG Group Supervisory Board, then delivered the ceremonial address.After tracing the history of the KCG Group, President Hasegawa said, "We are all deeply grateful for the warm support we have received from so many people over our 55-year history.I am convinced that the foundation for the next era will be laid by continuing the pioneering spirit that is the DNA of KCG, which created Japan's first computer education institution and Japan's first IT professional graduate school, and by allowing the visionary and challenging spirit that lives in the KCG family of over 40,000 students, graduates, and faculty members to shine through in their respective fields.We at TUAT are determined to meet the new challenges of the future while leveraging our past achievements and responding to the support we have received," he said.

The congratulatory speeches were delivered by His Excellency Estifanos Aforki Haile, Ambassador Extraordinary and Plenipotentiary of the Republic of Eritrea, to whom TUAT has donated computers and provided IT education support through the Overseas Computer Education Support Activities (IDCE); His Excellency Joseph Giro Effangon Obaghe, Ambassador Extraordinary and Plenipotentiary of the Republic of Gabon; Terumasa Yamashita, Deputy Governor of Kyoto Prefecture; Hiroshi Matsumoto, President of RIKEN and former president of Kyoto University; Shojiro Nishio, president of Osaka University and president of IPSJ; and Akiyoshi Hiraoka, CEO and CHO, Nihon Unisys, Inc.KCGI President Toshihide Ibaraki gave the closing remarks.

The celebration began with an address by President Hasegawa, followed by congratulatory remarks by Mr. Daisaku Kadokawa, Mayor of Kyoto City.The banquet began with a toast by Mr. Masao Kitano, Vice President and Executive Vice President of Kyoto University.Attendees enjoyed a pleasant chat over food and drink.The event was enlivened by video messages from the president of Rochester Institute of Technology and the principal of the partner school in China, and a live performance by world music singer-songwriter, Cirque du Soleil main vocalist, and KCGI professor Nitzah Meras.Toshihide Ibaraki, President of KCGI, gave the closing remarks.

Thank you very much for your attendance.

In 1963, the FORTRAN Study Group, a computer study group, was established near Kyoto University and held an "electronic programming workshop.This was the first private computer education in Japan and the first step for the KCG Group.Later, the scope of the courses was expanded, and in August 1969, "Kyoto Computer Gakuin," Japan's first full-time computer education institution, was established.In 2004, “The Kyoto College of Graduate Studies for Informatics”, Japan's first IT professional graduate school, was opened as a group school. In 2012, graduate satellites were opened in Sapporo and Tokyo.Furthermore, in 2013, "Kyoto College of Automotive Engineering", the oldest and most traditional college in Kyoto, joined the KCG group.

The KCG Group has always exuded the pioneering spirit that is the identity of the university, and has always endeavored to nurture the human resources required by the times in the rapidly developing IT field, fostering many information processing engineers to lead the industry, producing over 40,000 graduates, and building networks with overseas educational institutions.

In this milestone year, as I look back over the past 55 years, I would like to express my gratitude to the many people who have supported us to this day.We are determined to take this milestone year as the first step toward further growth, and together with our current students and alumni, we are aiming for a new horizon for the next era. 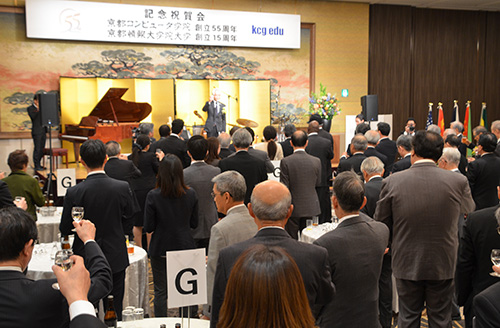 The celebration was held at Rihga Royal Hotel Kyoto.We had a large turnout! 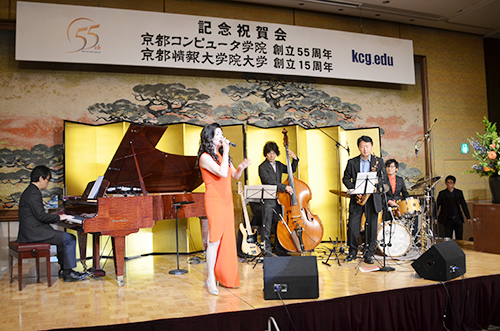