One of the menus of the KCGI (The Kyoto College of Graduate Studies for Informatics) public lecture (late), the lecture “Music and Technology” by Mr. Ayame (Kyoto Institute of Information Sciences, Visiting Professor at Kyoto Computer Gakuin) The “Exploring the Future Lifestyle” series began at KCGI Kyoto Main School on November 15, 2014.

The theme of the first edition is "Carrying Sound".Ayame talked about the technology for recording and reproducing music from the days of music boxes and phonographs to today's portable music players and cell phones.Ayame explained that, as a musician, he has always been interested in the evolution of technology, and his main focus was on what it means.Although the lecture lasted four hours with a break in between, students who attended said, "It was a good class with careful attention to detail, and the amount of content and breadth of coverage kept me from getting bored.The feedback was heard.

The first period of this lecture was held as an open lecture and distributed to the Sapporo and Tokyo satellites of the Kyoto University of Information Science and Technology. 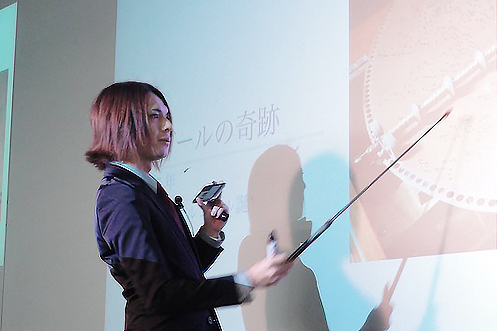