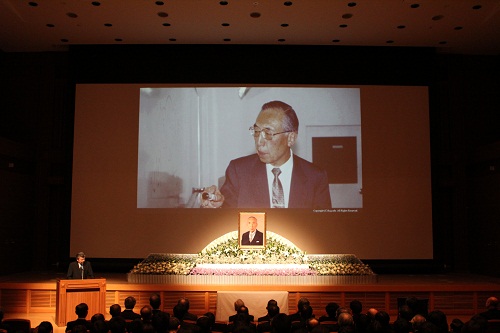 A school funeral and memorial service for Dr. Hiroshi Hagiwara was held quietly.In addition to the KCG Group, many people from Kyoto University attended the event.

As a pioneer of information technology research in Japan, Dr. Hagiwara has made significant contributions, including the development of the high-speed computer "TOSBAC-3400" (owned by the KCG Museum and certified as a Heritage of Information Technology). In addition, as the first president of KCGI, Japan's first IT professional graduate school, in April 2004, he has worked hard to promote education and research activities in a style of graduate school that had not previously existed in Japan.

The school funeral and memorial service began with a moment of silence.After Mr. Wataru Hasegawa, Chairman of KCGI and KCG President, and Mr. Toshihide Ibaraki, President of KCGI expressed their condolences, Mr. Makoto Nagao, former President of Kyoto University (Professor Emeritus of Kyoto University and former Director of the National Diet Library) and Mr. Shinji Tomita, Professor and Director of the Administrative Division of the Center for Integrated Cell-Material Sciences, Kyoto University, who attended as guests, reflected on their research and educational activities with Dr. Hagiwara.Following the dedication, Noboru Uemura, Professor at Kyoto City University of Arts and Visiting Professor at Toho Gakuen School of Music, performed Bach's Suite for Unaccompanied Cello.

Thank you very much, Dr. Hiroshi Hagiwara.I appreciate your hard work. Please rest in peace.I would like to express my heartfelt condolences.