A clear voice that makes you forget the heat!Transcending Generations "Let's Sing Together" 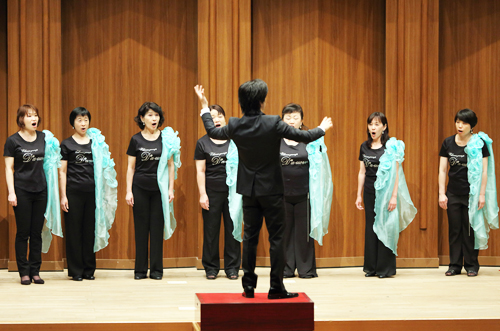 D'a-uovo, a female chorus that performs "Hanamizuki" and other harmony pieces

On Sunday, July 28, " Let's Sing Together" of " KCG Summer Festa 2013 " was held at the Kyoto Ekimae Satellite Concert Hall of Kyoto Institute of Information Science.This year's theme is "A Moment of Peace and Relaxation.Many people, from children to the elderly, participated, singing in unison with their clear voices.

The first part was a concert by the women's choir D'a-uovo.They performed seven songs, including "Kimi wo nosete" and "Hanamizuki.

In the second part, U-Choir, a chorus circle of Kyoto University of Information Science and Technology and Kyoto Computer Gakuin University, sang two songs, "Tsubasa wo Kudasai" and "YELL.We challenged them to sing a part of "YELL" in Chinese.After that, under the guidance of conductor Yohei Yoshimura, all participants practiced vocal exercises and "origami cranes".During the discussion, Shuhei Umehara, who wrote and composed the lyrics to "Origami Crane," shared his thoughts on the song, which has been sung across borders.Then, Dr. Yoshimura read a letter from an 80-year-old woman to her husband, who was killed in the war, followed by a chorus of about 170 participants.

U-Choir, a chorus circle of KCGI and KCG, performed two songs, "Give Me Wings" and "YELL 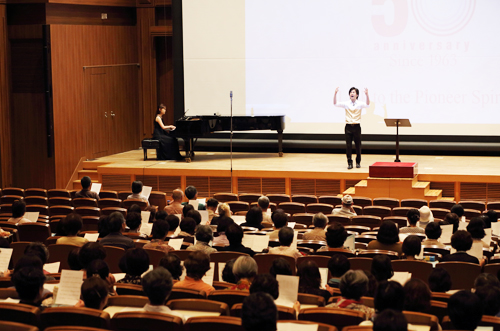 All the participants sang "Origami Crane" and the hall was filled with emotion.
END_OF_DOCUMENT_TOKEN_TO_BE_REPLACED