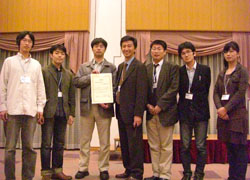 The "MDD Robot Challenge" is a contest in which contestants develop software to control a small airship in accordance with Model Driven Development, and compete in the form of models (software blueprints) obtained in the process and actual flight competitions.The goal is to achieve all of the following: research promotion, industrial promotion, and educational practice.

Ultrasonic sensors are placed on the ground, which allow the airship to detect its position and transmit it to a laptop computer for autopilot operation.The laptop computer sends commands to the airship to control the propeller based on the location information.These procedures require advanced programming development in which only the takeoff command is given by a person, and the rest is done by fully automatic control.

The team's flight was a mixture of anticipation and anxiety as adjustments continued until just before the competition.After takeoff, the aircraft passed the first pass point without incident and barely made it past the second pass point, but then deviated from its flight path so much that it was unable to land at its destination.The team won the championship with 9 points, the highest score among all participating teams (4 points for second place). 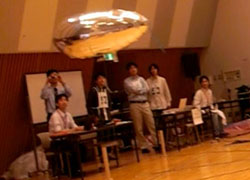 In the automatic navigation competition, contestants compete to navigate their airship to take off from the starting point and land at the destination while passing a predetermined point.Ultrasonic sensors are placed on the ground, which allow the airship to detect its position and transmit it to a laptop computer at the base station.The base station sends commands to the airship to control the propeller based on the location information.With these procedures, the airship can fly under automatic control. 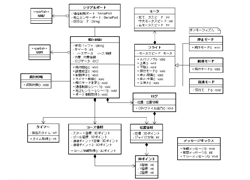 The MDD Robot Challenge is a contest to promote software development based on models, i.e., software blueprints, and to improve software quality, rather than simply flying airships.Therefore, the competition will also include the judging of pre-submitted models.
As projects grow in size and need to be developed by a larger group of engineers, there is an increasing need for communication to clarify the direction and goals of the project using words and diagrams, such as documentation and modeling.

One-on-one contest.Each airship attaches a long ribbon to the rear, and the airship that touches its opponent's ribbon first wins.After takeoff, the game is lost if the aircraft, including the ribbon, touches the surrounding walls or floor.Match time is 5 minutes.Control controllers are prepared by each team.There were various teams that used mice and keyboards, teams that used game controllers and joysticks, and teams that took on the challenge with their own controllers.

Members involved in this project