Talk Live by Ayame of Skyscraper Opera on April 14 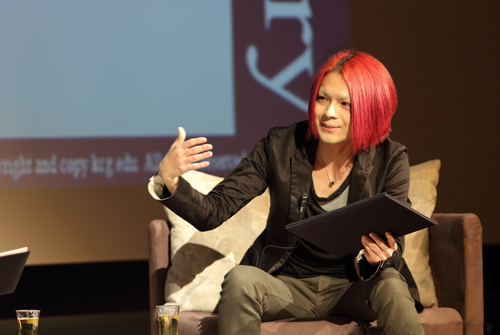 In commemoration of the 50th anniversary of Kyoto Computer Gakuin (KCG) and the 10th anniversary of the The Kyoto College of Graduate Studies for Informatics (KCGI), a talk live on the theme of "I and IT" was held on April 14 at KCG Kyoto Station School Did.

This time, as the first of the "Me and IT" series of talk live events, we invited Ayame, keyboardist of the popular young visual-kei band "Skyscraper Opera," to talk about the relationship between music, computers, and IT under the title of "Skyscraper Opera Ayame-style: Information Society and Music.

A large number of Saiau's fans, including junior high and high school students and working adults, gathered to listen to her talk about the role of IT in her everyday musical activities.

Ayame's father was an engineer in the field of audio equipment, so there were various pieces of equipment in the house.This environment helped him to start DTM (Desktop Music) in junior high school, and he also created a system to search his CDs by creating a database of them.During my time at Keio University's Faculty of Environment and Information Studies (SFC), I also studied information-related subjects, and it was around this time that I formed a band and began my musical activities.Since then, he has gained popularity for his IT-based musical activities.In his speech, Ayame told the students of the KCG Group, "It is not technology that you learn at school.He emphasized that "skills and knowledge are learned and acquired by oneself," and added, "What is taught by teachers at school is how to use the knowledge.They are taught how to turn knowledge into wisdom.Anyone with a single PC can make a difference.The hints for a big hit are lying dormant in the most unlikely places, so I hope that you students will use your interesting ideas to cut through the world from an angle and bring about change.

The main topics of the lecture are as follows

Went to SFC to study computers
I went to Keio University's SFC because I wanted to study computers.But I got into all kinds of genres, not just IT-related, but cognitive science, economics, Western art, and so on."

I longed for Tetsuya Komuro.
When I was in junior high school, I admired Tetsuya Komuro.It was cool to see them singing on the synthesizer, making full use of the computer.When I was in college, I formed a band and my charge was to "program music".I love programming using the C language.I felt like I was creating some kind of world for myself.I feel like a god.However, I think that the technology was not good enough.There are many people in the world who are good at programming.There are some amazing people who can finish in less than 20 lines what it takes me 1,000 lines to finish.

Music and academia both reach the same conclusion.
I first thought of music as a career when I was in college.Although I had been interested in the subject up to that point, I had thought about pursuing a career in academia.Then I began to see that the worlds of academia and music were very similar.Pursue the truth of the world.The conclusion we reach is the same, isn't it?"

Skyscraper Opera" is surprisingly analog.
My band is surprisingly analog.When someone brings the framework of a song, the vocalist first sings while playing the guitar.Then everyone writes chord progressions, etc. on the whiteboard.The chorus, introduction, etc. are composed and played all together.There is no such thing as IT there at all.It is not that there is no such thing as a song made on a computer.After writing on the whiteboard, we make full use of IT.First, we take a picture of the board and record the sound with an iPhone and put it on the cloud.Each member downloads the data from his or her home and shares the data."

Combined academic and musical activities
The number of artists has increased over time, from 2000 to 2010, but I would say that the number of artists who have multiple areas of expertise has increased.Music is also entering an era of diversification.In my case, I would like to study various things, such as economics and music, Western culture and music, and combine them with music.

Required ability to think out of the box and apply ideas
It is not technology that you learn in school.Skills and knowledge are learned and acquired by oneself.IT continues to evolve and new things are constantly emerging.Therefore, those who cannot remember without being taught may be fine now, but even if they find a job, they will not be able to keep up with the times and will be left behind.Again, get into the habit of learning technology on your own.Then, why do they come to school?What the teacher teaches is how to use the knowledge.Application.They are taught how to turn knowledge into wisdom.In the extreme, programming can be done by children.What you do with it is important.We need to be able to think out of the box and apply our ideas."

I am not afraid of failure.
The students spend about three months working on the software and submit it to the teacher, and even if it is a total failure, no one loses anything, right?The students' strength lies in their ability to take on challenges without fear of failure.If this were a working person, it would be difficult.It would cost the company dearly."

Typical addiction
I'm a typical internet/cell phone addict, and I'm open about it, but I'd probably die if I couldn't get online for three minutes.When I get on a plane, for example, I can't help but be anxious until we land."

Hidden Potential
My mother bought a camera phone when it was first released.At the time, the dominant impression was, "I would never use such a camera.I bought a cell phone with a TV.I was happy to be able to put the TV in my pocket, but the people around me were indifferent, saying, "There's no way we're going to watch it.But now it's very different.Sometimes, products that seem useless have hidden potential for innovation.

The Biggest Failure
During a recording session, I accidentally put a finished song in the trash on my computer and erased it.It was a total mistake, a human error.I can't go back to the way it was!"When I learned of the worst possible outcome, I was pale and broke out in a cold sweat.After that, I did not sleep and hurriedly reworked it.After a time, you forget the song.It is finally done, and I think, or rather try to think, that what we lost was better than what we got.That is good, because it happens to be my job.I shudder to think if it were someone else's.I learned my lesson, and now when I have a song, I make a quadruple backup, including a USB flash drive and the cloud."

Wearables are becoming more and more common.
Cell phones are an extension of the human senses.In recent years, we have also seen the appearance of eyeglass-type smartphones such as Apple's iWatch and Google Glass, which are more familiar to our bodies.Wearability.Humans are becoming cyborgs.I am sure that new lifestyles and ways of thinking will emerge as a result."