A special lecture was given by Furuno Electric Co.

Furuno Electric is a manufacturer and distributor of electronic equipment for marine and industrial use, and in 1948 succeeded in commercializing the world's first fish finder.The head office is located in Nishinomiya City, Hyogo Prefecture.

In his lecture, Mr. Yasushi Nishimori of Furuno Electric Technical Research Institute first introduced how Furuno Electric succeeded in commercializing fish finders under the title of "Furuno Electric's Research and Development: From the Birth of Fish Finders to the Present and Future".He also introduced a number of interesting episodes in the development of the sonar, including the fact that the founder, Mr. Kiyotaka Furuno, believed that the floating bags of fish should reflect ultrasonic waves, despite the common belief at the time that fish bodies do not respond to ultrasonic waves, and that the bubbles generated during ship navigation were an obstacle to detection.

Mr. Nishimori also introduced a movement in Japan to introduce an IQ system to allocate catches to each vessel from the viewpoint of protecting fishery resources, in which case the demand for fish finders that can identify specific species and length of fish will increase.

Next, Mr. Takashi Imasaka of Furuno Denki's Technical Research Institute introduced the workflow of development work at Furuno Denki, starting with the design of both hardware and software, followed by product prototyping, and then moving on to marine experiments and field tests for quality inspection, using actual examples.

He also discussed the fact that while Furuno Electric has the top share of the global market as a general marine electronics manufacturer, it is not very strong in the market for pleasure boats, and explained the importance of "open innovation" in actively seeking partners and ideas from outside the company in order to improve performance in areas where the company is not strong.

Finally, Mr. Imasaka expressed the characteristics of Furuno Denki's personnel suited for research and development as follows, referring to the initials of KCG.K: likes to think, C: likes to communicate, G: patient.

The KCG Group will focus on education in marine IT with the cooperation of Furuno Electric, which signed an industry-academia collaboration agreement with the Group in 2015.Starting this fiscal year, KCG's Applied Information Department has established a full-time 3-year marine IT course, and The Kyoto College of Graduate Studies for Informatics (KCGI) 's next-generation industry course has established a marine IT program, and is striving to develop human resources who can lead this field. The 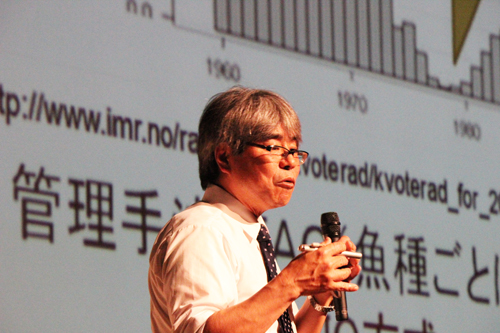 Yasushi Nishimori discusses the development of the fish finder 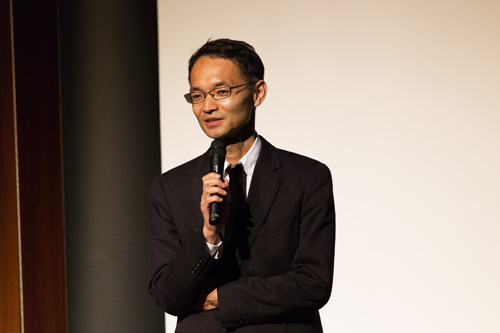