Realization of cyber campus between Jeju National University and Japan-Korea

On September 25, 2008, Kyoto University of Information Studies and Korea / National Jeju University signed and signed an agreement to build a “Japan-Korea Cyber Campus” where both students can take lectures from both universities on the Internet. did.

The signing ceremony held at Jeju National University was attended by the university president, Mr. Takatada, President of the University, and Mr. Hiroshi Hasegawa, President of the University.At the same time, a memorandum of practical level regarding communication experiments using a remote lecture system was signed, and in the future, for the establishment of a cyber campus, we would like to examine communication quality between the two universities and the creation of a framework for exchanging lectures. To go.The first lecture will be held during this fiscal year, and it is expected that the exchange between the education and research departments of both universities will be further promoted by realizing the Japan-Korea Cyber Campus.

In September 2006, Kyoto Information Graduate University and National Jeju University signed an academic exchange agreement for the purpose of education and research in the IT field and mutual human exchange.In November 2007, the four members, including the Jeju IT Association (Korea) and the National Association of Regional Information Industry Associations (Japan), signed a memorandum on cooperation in promoting ICT projects for human resource development and exchange in both countries. Was concluded.Since the same year, we have held a Japanese company briefing session for university students in Jeju with the cooperation of local governments.

* Featured in a Korean newspaper. 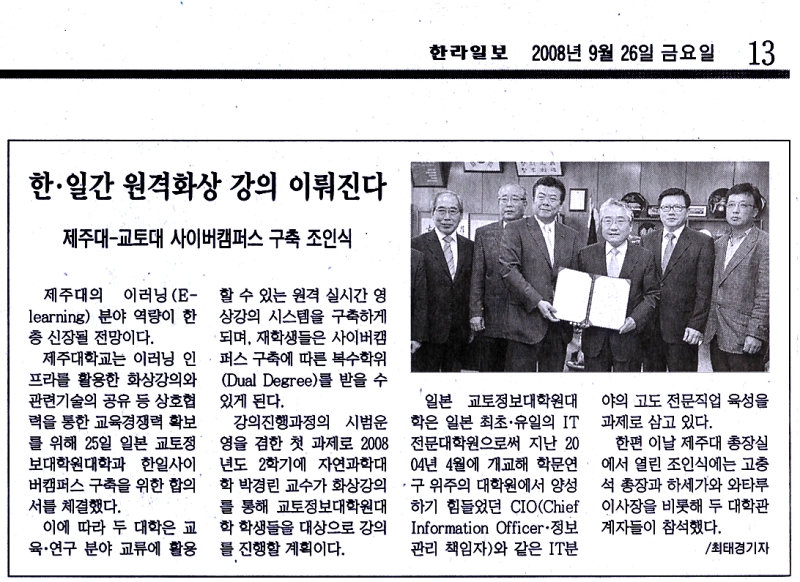 Jeju University's e-learning field is expected to be further expanded.

On June 25, Jeju University agreed to establish a Japan-Korea Cyber Campus with Japan-Kyoto Graduate School of Information Science to secure educational competitiveness through mutual cooperation such as image lectures utilizing e-learning infrastructure and sharing of related technologies. Signed a letter.

As a result, both universities will build a real-time remote video lecture system that can be used for exchanges in the education and research fields, enabling students to obtain multiple degrees (Dual Degree) by building a cyber campus. .

Prof. Gyung Leen Park of the Faculty of Natural Sciences is scheduled to give an image lecture for students of Kyoto University of Information Sciences in the second semester of 2008 as the first trial that also serves as a demonstration management of the course of the lecture.

On the same day, the signing ceremony held in the president's office of Jeju University was attended by representatives from both universities, including President Takachuchi and President Hiroshi Hasegawa.

On the 25th, Jeju University signed a contract with the Japan Graduate School of Information Science in Kyoto to build a cyber campus.

Through this agreement, both universities will strengthen their educational competitiveness through image lectures utilizing e-learning infrastructure and sharing of related technologies.

Both universities will also actively develop academic exchanges and student / faculty exchange programs in addition to the management of multiple degree programs in the wake of the “Cyber Campus Construction” through this agreement.

Jeju University has already built a real-time remote video lecture system that can be used in the latest education and research fields.Kyoto Information Graduate University is the only IT professional graduate school in Japan that opened in 2004.

On June 25, Jeju University signed an agreement with Kyoto University of Information Technology, the first and only IT graduate school in Japan, to build a “Japan-Korea Cyber Campus” based on image lectures and IT technology sharing.

As a result, both universities have been able to manage multiple degrees (Dual Degree) programs, academic exchanges, mutual visits between teachers and students, and intensive lectures.

As part of this, Professor Gyung Leen Park from the Faculty of Natural Science will first give an image lecture to students at Kyoto University of Information Sciences in the second semester of this year.

Participants from both universities, including President Takachuchi and President of Kyoto University of Information Studies, attended the ceremony for concluding the agreement held at the president's office at Jeju University.

Opened in April 2004, the Kyoto Information Graduate University is a highly specialized IT professional (leader), such as the Chief Information Officer (CIO), who is difficult to train at existing graduate schools with a focus on academic research. ) The goal is training.

Both universities recently signed a memorandum, and decided to run a university-to-university interchange program while building a video lecture system in the field of education and research.

In this semester, professors at Jeju University will give lectures to the Japanese side via the Internet.Kyoto Information Graduate University is the only IT professional graduate school in Japan.