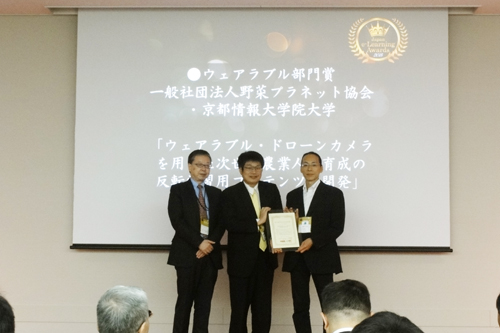 The e-Learning Awards 2015 Forum was held for three days from October 28-30 at the Sola City Conference Center in Tokyo's Chiyoda Ward, and The Kyoto College of Graduate Studies for Informatics (KCGI), which won the Wearable Category Award at the 12th Japan e-Learning Awards, received an award on October 28.On the 29th, KCGI Associate Professor Keiji Emi gave a lecture entitled "Creating JMOOC Educational Materials with Internationalization and Multilingualization in Mind," which fully demonstrated KCGI to the visitors.

The award was presented to the content "Development of Content for Reversible Learning of Next Generation Agricultural Human Resource Development Using Wearable Drone Camera," which was jointly produced by KCGI and Vegetable Planet Association.This e-learning material, which includes content for use in lectures on agricultural IT (smart agriculture) given by KCGI Visiting Professor Tomoshi Nagawa, has been developed in cooperation with KCGI Associate Professor Keiji Emi and others.The Forum highly commended its content.

KCGI has newly established the Applied Information Business Course in 2016, and is building a curriculum and preparing various related lectures in the fields of marine IT, medical IT, etc., in addition to agricultural IT related to this award-winning work.This award will give impetus to the establishment of a new course.