Behind the scenes of "Hatsune Miku" development!Prof. Ito KCGI lectures in Kyoto 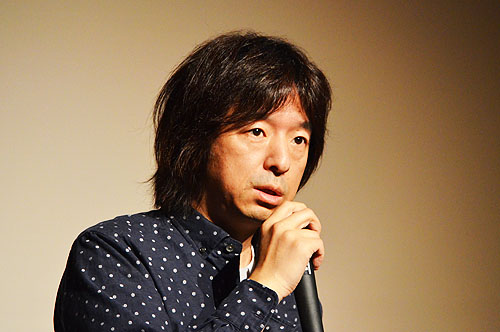 Produced and raised the vocaloid "Hatsune Miku" at Kyoto Information Graduate University (KCGI) Hiroyuki Ito A special lecture in Kyoto by Mr. Krypton Future Media Co., Ltd. (Head office: Sapporo City) was held on December 6th at the The Kyoto College of Graduate Studies for Informatics, Kyoto Hall.Prof. Ito introduced how "Hatsune Miku" has become loved around the world, collaborations with various genres, and the new software "Hatsune Miku V3," which was released this September."I hope that "Hatsune Miku" will continue to contribute to the international community through her creative activities.The KCGI and KCG students listened intently to the lecture by Professor Ito, a man of the moment who has attracted attention from all over the world.

Hatsune Miku" was born in 2007, standing 158 centimeters tall, weighing 42 kilograms, and 16 years old.The band has 100,000 songs, 1 million videos posted on YouTube, more than 1.6 million official Facebook users, and tickets to its 3D concerts held around the world are always sold out.Professor Ito said, "The technology of electronic music and voice synthesis itself was not new, but there was no example of combining it with characters.Hatsune Miku, a "kind of interface" (Mr. Ito), was a "kind of interface" (Mr. Ito), and it went through stages of secondary and tertiary creations, and as a "chain of creations" expanded its means of expression from video to cosplay, from illustrations to figures, and from 3D models to animation, and so on.

At first, there were copyright issues, and Professor Ito said, "We felt that it would be burdensome for third parties to obtain permission from Krypton and the secondary producers for each and every use of their secondary creations.We have set up a content submission site, "piapro," and have made it possible to freely use the content as long as it is for non-commercial use and the creator is thanked as a matter of good manners.We have tried to create a place where creators can actively create without shrinking," he explained.This freedom has been a major reason for the popularity among creators around the world and the expansion of the fan base.

Hatsune Miku" has since been commercialized in numerous collaborations, including books of illustrations, figurines, tie-ups with convenience stores, racing teams, and games.At a concert held in Tokyo in August 2009, the 3D avatar "Hatsune Miku" appeared on stage for the first time using a transparent screen.The event was reported on TV news around the world.She is popular among 13 to 17 year olds of all ages and among women of all genders, and she remains the most popular Japanese "singer" on Chinese portal sites.In Hokkaido, where Crypton is headquartered, Miku Hatsune has appeared at events such as the Sapporo Snow Festival, the display corner at New Chitose Airport, train wrapping, and music and movie festivals, helping to attract visitors and enliven the local community," said Professor Ito.

Regarding the just-released "Hatsune Miku V3," he said, "Six years have passed since its debut, and fans have strongly asked me, 'What should we do with it except sing?-Please support Macs - two points."We have set our development concept to "make everyone a music creator," and we have succeeded in releasing an all-in-one software product that meets these requirements.After that, the English version will be released, and we hope that it will generate more creations around the world than ever before," he explained.After showing a video of a concert in Taiwan that he filmed mainly from the audience side, he said, "Currently, there is political friction with neighboring countries, but it has nothing to do with creators and creativity, or with activities at the private level.I would like to continue contributing to the international community through my creative activities," he stressed.During the Q&A session, many questions were raised by the students, and Professor Ito answered each one in detail.

Professor Ito took office in April of this year.In recognition of his international activities and technological innovations, he was awarded the Medal with Blue Ribbon in the fall.KCGI and KCG have mutual class exchanges and have a system for auditing each other's classes.There will be opportunities to learn from Professor Ito in the Content Business Course at KCGI and the IT Voice Actor Course in the Information Processing Department of the Computer Science Department at KCG, which will open in April 2014. 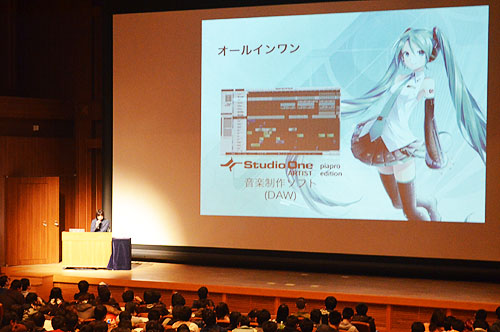