Lecture on the Frontiers of Agile Development 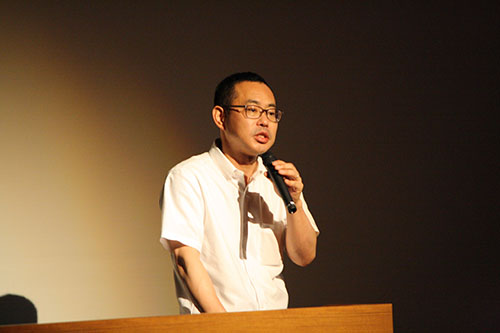 On June 8, Kenji Hiranabe, president of Eiwa System Management Co., Ltd. (Head Office: Fukui City, Fukui Prefecture), gave a lecture titled "The Front Line of Agile Development: Building Collaborative Teams of Business and Engineers" at the Kyoto Station Satellite Hall of The Kyoto College of Graduate Studies for Informatics (KCGI).Eiwa System Management is a company that specializes in agile development, and its subsidiary Afflel Inc. is a sponsor of the ET Robot Contest Kansai, which KCG and KCGI cooperate in organizing, in which beginning and intermediate level engineers acquire planning and development skills through robot production.

Agile development is a method in which the business side and the development side work together to form a team, divide the work process into short cycles, and analyze, design, and implement the system to make it work.The most important parts of the system are selected and developed first, and then the users and developers work together to verify the system, exchange ideas, obtain feedback, and make improvements.It has been widely adopted in recent years as a method that overcomes the disadvantages of the conventional "waterfall" method of development, in which the design is carried out according to the initial specifications all the way to completion, such as long construction periods, difficulty in making design changes during the process, and unnecessary functions that are often left over as a result.In the lecture, he also introduced the recently popular "scrum" method of agile development, in which a team consisting of a "product owner," a "development team," and a "scrum master" who supports both the "product owner" and the "development team" works together.He also shared a behind-the-scenes story about the surprisingly effective analog management method of visualizing the flow and progress of work in the IT development field by pasting a piece of paper with each person's task written on it on a white board.Mr. Hiranabe concluded his speech by saying, "I hope that you will join the company with the enthusiasm to change it, and that you will continue to propose and reform it.Knowledge of agile development is a strong weapon in that case," he said, encouraging the students who are expected to play an active role in the IT industry in the future. 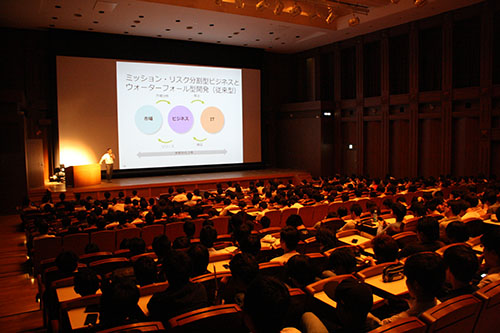