The MUΣA show, a fusion of song, fashion, and dance, was held. 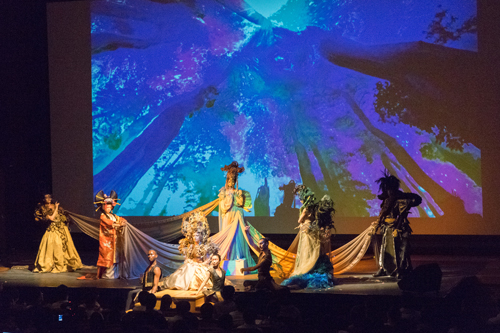 A show that combines performance and CG images on stage

The Kyoto College of Graduate Studies for Informatics (KCGI) professor and singer-songwriter Nizza Melas MUΣA show, which was the director and vocalist, was held on August 6, 2016 at the Kyoto University of Information Science and Technology Kyoto Hall in front of the satellite station hall. It was.The MUΣA Show is a comprehensive performing arts show featuring songs from the album "MUΣA," created by Professor Nitza Melas to commemorate KCG's 50th anniversary (2013), in collaboration with performances and videos.MUΣA means "goddess" in Greek.This year was the second time the show was held, following the one in January, and eight songs from the MUΣA album were performed.

For this show, Professor Nitza Melas collaborated with a diverse group of artists active in the U.S., resulting in an unprecedented and creative stage.Lisa Yamasaki, a highly acclaimed hair artist in the U.S. who has been active mainly in Los Angeles, participated in the event, showing her creative hair art and costumes inspired by MUΣA's songs.On the screen behind the stage, a fantastic computer-generated image was projected, created by Associate Professor Kirill Kosik of KCGI to match the image of the song.The dance choreography was done by Kana Miyamoto, a native of Fukuoka Prefecture who began learning dance as a child and is now a dance instructor based in Los Angeles, and the makeup was done by ROSHAR, a master makeup artist active in New York and Los Angeles.

On stage, dancers and models active in the U.S. performed brilliant and dynamic dances and performances, with songs by Professor Nitza Melas at the center of the show.The dressing of costumes, which is usually done backstage, was staged on stage as part of the performance, giving the audience an opportunity to see up close the dressing techniques of top artists, which are rarely seen.Costume designs included a strong Asian theme, such as a Buddha and a dragon, in consideration of the Japanese performance.The "Moon Goddess" song was performed by male-female pairs of dancers dressed in hanairi (courtesans) and haori hakama (traditional Japanese male and female dancers) costumes, who danced dynamically using the entire stage.In the following song "Sana," the dancers danced in kimono fashion at the back of the stage while in front of them, they utilized red Japanese umbrellas as props, showing a unique fusion of Western and Eastern cultures.

At the end of the show, visitors had the opportunity to see hair art and costumes up close.The students went up on stage to see the hair pieces, costumes, and nail art worn by the models, and were amazed at the high level of skill and expression of the professional artists.The KCG Group will continue with the MUΣA show to create original IT-based performing arts with Prof. Nitza Melas at the helm. 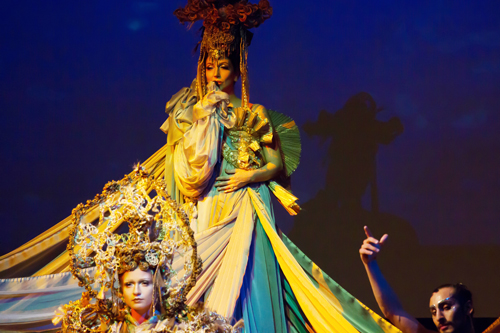 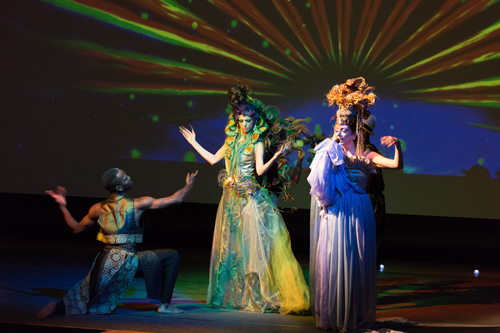 Brilliant collaboration of singing and dancing 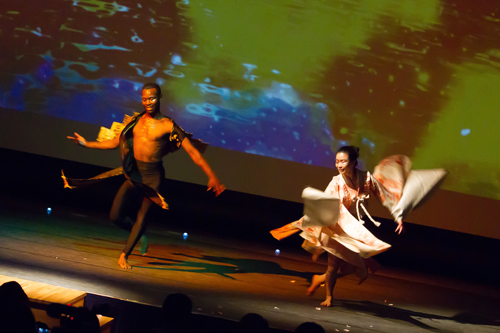 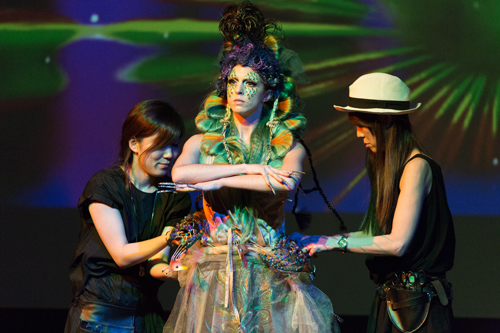 Model dressing shown as part of the production 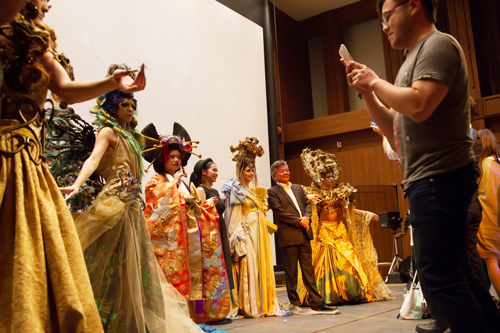