Degree Conferral and Graduation Ceremonies for the First Semester of 2015 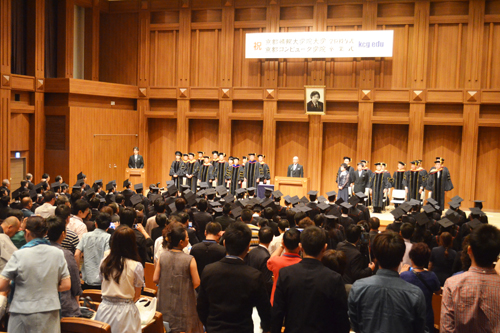 KCGI degree conferral ceremony and KCG graduation ceremony for the first semester of 2015.After completing their studies, the students left for the front line with many memories in their hearts (September 15, 2015, Kyoto Station Satellite Main Hall, Kyoto Institute of Information)

The Kyoto College of Computer Science (KCGI) degree conferment ceremony and the Kyoto Computer Gakuin (KCG) graduation ceremony for the first semester of the 2015 academic year were held on Tuesday, September 15, at the Kyoto Station Satellite Main Hall of the Kyoto Institute of Information.The representatives of graduates and alumni made a powerful pledge: "I would like to reaffirm the role that ICT (Information and Communication Technology) should play in society, and contribute to society while maintaining a global perspective and deep insight, without being satisfied with the current situation.

Mr. Toshihide Ibaraki, President of KCGI, conferred the degree of "Master of Information Technology (Professional)" on graduates, and the principals of Rakuhoku and Kyoto Ekimae schools conferred the diploma and degree on each KCG graduate.After the ceremony, certificates of commendation and commemorative gifts were presented to the KCGI graduates who were selected as the Grand Prize and Excellence Award winners for their outstanding academic and research achievements.

In his ceremonial address, Mr. Wataru Hasegawa, Chairman of the Board of Directors of KCG Group, said that the social situation that awaits graduates and graduating students is very severe due to economic turmoil, conflicts in various parts of the world and territorial issues in Japan.He also mentioned the management and operation of the geographic name top-level domain ".kyoto", which was created in cyberspace this year, and education on the use of IT in the contents business, ocean, agriculture, and tourism as the KCG Group's initiatives.

Introducing "Moore's Law," President Ibaraki touched on the astonishing progress of ICT in science and technology, saying, "It is said that the end of the law is approaching, and that is when your new ideas and concepts will have value.I hope that you will actively take on the challenges of the possibilities that will arise one after another in the ICT society," he said.

Then, on behalf of the graduates and alumni, Mr. Shun Duan of KCGI's Graduate School of Applied Information Technology, majoring in Web Business Technology, said, "Since entering the university, we have been able to lead a fulfilling student life in a different culture with the support of faculty members, friends, and family.I would like to make use of the advanced professional skills I have learned at this university, work hard to improve myself in the ever-advancing ICT fields, and play an active role as a specialist," he said in his powerful "graduation address.At the end, all the attendees sang "Hotaru no Hikari" together.After the ceremony, a celebration party with KCGI graduates was held at Rihga Royal Hotel Kyoto.

Congratulations to our graduates and alumni!We wish you all the best in your future endeavors.